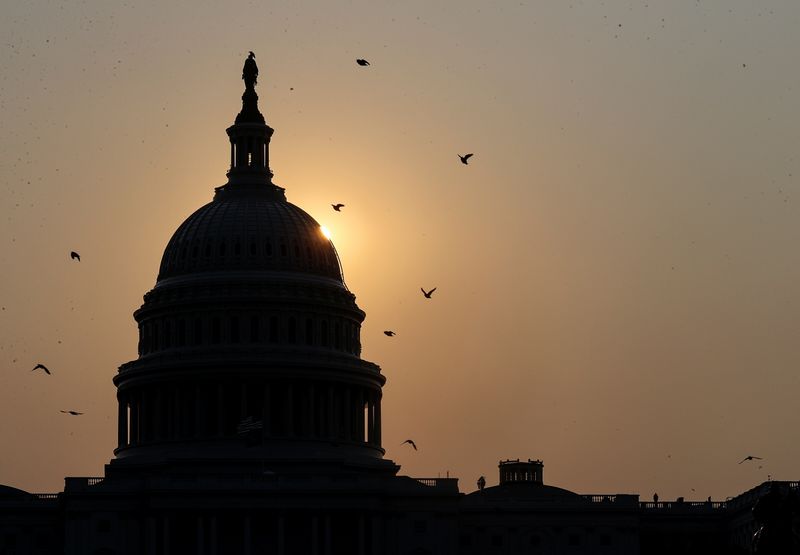 © Reuters. FILE PHOTO: The sun rises behind U.S. Capitol ahead of a weekend “Justice for J6” rally in Washington, U.S., September 13, 2021. REUTERS/Jonathan Ernst

WASHINGTON (Reuters) -The U.S. House of Representatives on Tuesday is scheduled to debate and vote on legislation to fund the federal government through Dec. 3 and raise the nation’s borrowing limit, according to the House Appropriations Committee.

House of Representatives Speaker Nancy Pelosi and Senate Majority Leader Chuck Schumer set the stage for a showdown with Republicans on Monday when they said they would combine the spending and debt measures in one bill, despite Senate Republican Leader Mitch McConnell’s vow to block an increase in the $28.4 trillion debt ceiling.

Congress faces a Sept. 30 deadline for approving stop-gap funding that would avert partial government shutdowns with the start of the new fiscal year on Oct. 1.

Sometime in October, the Treasury Department will exhaust its borrowing authority unless the debt limit is raised from its current $28.4 trillion ceiling.

The bill would suspend the limit on government borrowing through December 2022.

The current debt ceiling already has been breached, with debt at $28.78 trillion. It is temporarily being financed through Treasury Department “extraordinary measures” that are projected to be exhausted in October.