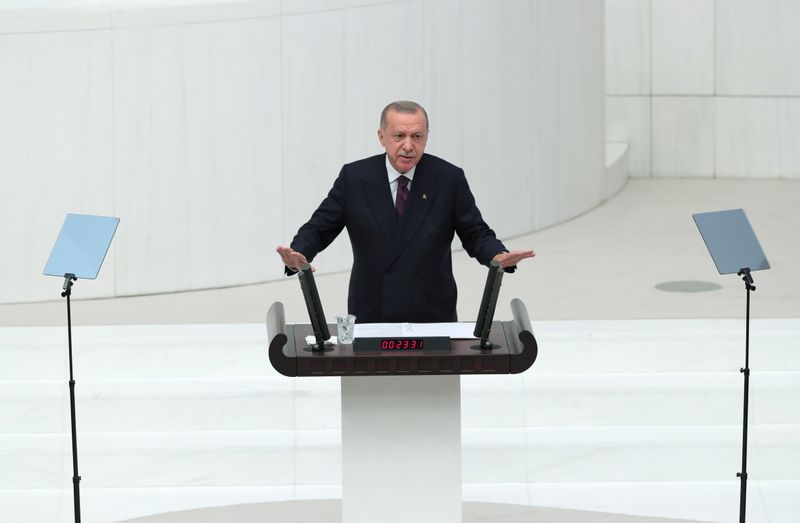 © Reuters. Turkey’s President Tayyip Erdogan addresses members of parliament as he attends the reopening of the Turkish parliament after the summer recess in Ankara, Turkey, October 1, 2021. Murat Cetinmuhurdar/PPO/Handout via REUTERS

By Azra Ceylan and Jonathan Spicer

ISTANBUL (Reuters) -President Tayyip Erdogan said on Sunday Turkey had ordered agricultural cooperatives to open about 1,000 new markets across the country to provide “suitable” prices for consumer goods in the face of nearly 20% annual inflation.

Construction would quickly begin on the shops to provide Turks “cheap and high quality goods” and to “balance out markets”, he said, after consumer price rises to levels well above a 5% official target.

“We gave the order for about 1,000 of these businesses to open around Turkey, starting at 500 square-meters each,” Erdogan told reporters after visiting an agricultural credit cooperative outlet in Istanbul.

“These are places where prices are suitable to our citizens’ budgets,” he said of the commercial outlets.

Annual food inflation of nearly 30%, a global jump in commodity prices and the sharp depreciation of the lira currency have driven inflation higher throughout the year.

Inflation has remained in double digits for most of the past five years, eating into household earnings and setting Turkey well apart from emerging market peers.

Under pressure from the president for stimulus, the bank unexpectedly cut its key rate by 100 basis points to 18% last month, sending the lira to record lows.

Yet in recent weeks the government began high-profile inspections of Turkey’s largest supermarkets for “unreasonable pricing” and “consumer victimisation”. It also probed some restaurant breakfast prices in the eastern province of Van.

Vice President Fuat Oktay said on Saturday that increasing food production in villages is vital to head off exploitative pricing.

In early 2019 – on the heels of a currency crisis that sent inflation soaring – the government opened its own markets to sell cheap vegetables and fruits directly, cutting out retailers it accused at the time of jacking up prices.