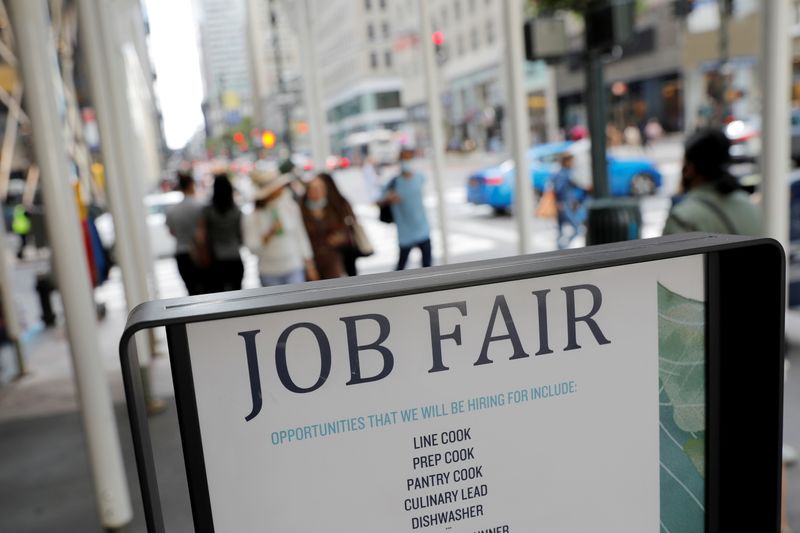 © Reuters. FILE PHOTO: Signage for a job fair is seen on 5th Avenue after the release of the jobs report in Manhattan, New York City, U.S., September 3, 2021. REUTERS/Andrew Kelly

WASHINGTON (Reuters) – U.S. employment increased more than expected in October as the headwind from the surge in COVID-19 infections over the summer subsided, offering more evidence that economic activity was regaining momentum early in the fourth quarter.

But the brightening outlook was somewhat clouded by millions of unemployed Americans who remained at home even as companies are boosting wages, generous government-funded jobless benefits have ended and schools have reopened for in-person learning. The labor force is down 3 million from its pre-pandemic level.

“The dog days of summer are long gone and the U.S. economy is gearing up for an acceleration in growth and activity in the fourth quarter,” said Brian Bethune, a professor of practice at Boston College. “Demand for labor is strong, but there is an issue with matching people with the jobs that are available.”

President Joe Biden hailed the acceleration after two months of moderate gains, saying the nation needed to “keep driving vaccinations up and COVID down,” for “our economy to fully recover.” Biden said vaccines had “made the economy the envy of the world.”

Manufacturing added 60,000 jobs, with 28,000 of the positions at motor vehicle manufacturers, an encouraging sign for an industry that has been hobbled by a global semiconductor shortage. Construction payrolls increased by 44,000 jobs.

But state and local government education shed 65,000 jobs. The government said pandemic-related staffing fluctuations in education have distorted normal seasonal patterns, making the changes in employment in the sector challenging to interpret. Shortages of bus drivers and other support staff have been well documented. Overall government payrolls fell by 73,000 jobs.

The job gains joined rising consumer confidence and services sector activity in painting a more favorable picture of the economy, after the Delta variant of the coronavirus and economy-wide shortages of goods restricted growth in the third quarter to its slowest pace in more than a year.

The Federal Reserve on Wednesday announced it would this month start scaling back the amount of money it is pumping into the economy through monthly bond purchases.

Stocks on Wall Street rallied on the report, lifting the main indexes to record highs. The dollar rose against a basket of currencies. U.S. Treasury yields fell.

“The solid gain in employment is consistent with a strong quarter for output growth,” said Michael Feroli, an economist at JPMorgan (NYSE:) in New York.

Details of the smaller survey of households, from which the unemployment rate is derived were mixed. The unemployment rate fell to a 19-month low of 4.6% from 4.8% in September. The number of people unemployed for 27 weeks or more dropped 357,000 to 2.3 million. They accounted for 31.6% of the 7.4 million people officially unemployed last month.

But a modest 104,000 people entered the labor force last month, making it harder for employers to fill 10.4 million jobs that were open as of the end of August. The labor force participation rate, or the proportion of working-age Americans who have a job or are looking for one was unchanged at 61.6%.

It has remained within a narrow range of 61.4% to 61.7% since June 2020. A small rise in the participation rate among the prime age population and people below 24 years was offset by a drop in the 55 and over age group. Women’s participation rate edged up and they took 57.3% of the jobs last month.

The labor market disconnect has been blamed on caregiving needs during the pandemic, fears of contracting the coronavirus, early retirements, massive savings and career changes as well as an aging population and the recently ended expanded unemployment benefits. With many people who moved out of cities during the pandemic yet to return, there could also be a mismatch between the open jobs and location.

There are concerns that the White House’s vaccine mandate, which comes into effect on Jan. 4 and applies to federal government contractors and businesses with 100 or more employees, could compound the worker shortages. There has also been a rise in strikes as workers take advantage of the tight labor market to demand more pay and better conditions.

The scramble for workers continued to boost wage growth, with average hourly earnings rising 0.4%. That lifted the annual increase to 4.9% in October, the largest gain in eight months, from 4.6% in September.

This, together with record savings should help to underpin consumer spending over the holiday session, though salaries are lagging inflation and shortages of goods abound. Some economists believe the economy is close to maximum employment.

“Unless people start flocking back into the labor market and the labor force starts to surge, we could very likely reach that level by the end of next summer, if not sooner,” said Joel Naroff, chief economist at Naroff Economics in Holland, Pennsylvania. “That means we could see the initial rate hike by early fall. Economists are starting to forecast two rate hikes next year and that is quite possible.”