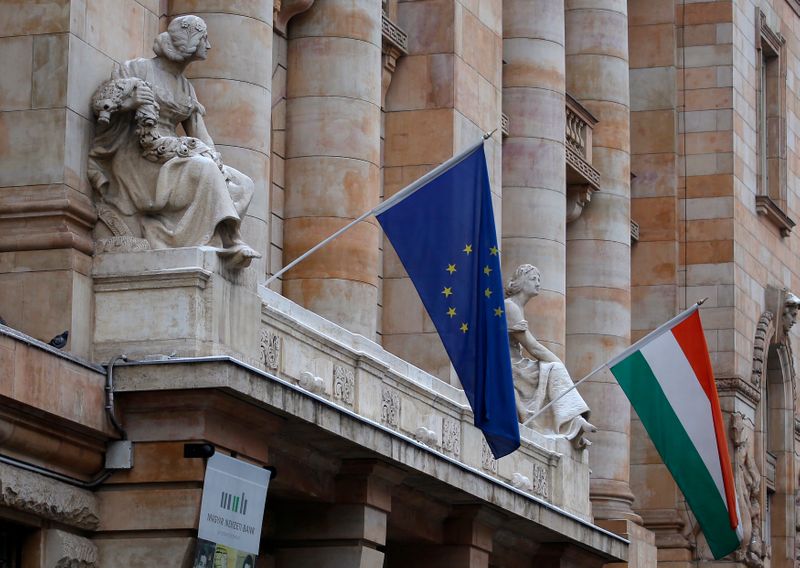 © Reuters. FILE PHOTO: The Hungarian national flag and the flag of the European Union fly on the building of the National Bank of Hungary in Budapest January 10, 2013. REUTERS/Laszlo Balogh

By Krisztina Than and Gergely Szakacs

BUDAPEST (Reuters) -Hungary’s central bank raised its base rate on Tuesday by a smaller-than-expected 15 basis points to 1.65% and pledged similar hikes in the coming months to curb inflation, while it also reduced its bond purchases further.

The National Bank of Hungary, which in June became the first in the European Union to start raising borrowing costs, has now delivered four rate hikes in a row. The previous three, over the past three months, had each been of 30 basis points.

The bank said risks to the inflation outlook remained on the upside due to an increase in commodity prices and freight costs, and also rising wages as Hungary’s labour market tightens amid a strong economic rebound from the pandemic.

“The inflation outlook and the risks surrounding it clearly warrant the continuation of the ongoing, monthly interest rate tightening cycle,” the Monetary Council said in a statement.

Deputy Governor Barnabas Virag said the bank would continue with 15-basis-point rate increases on a monthly basis in the fourth quarter, and would next review its policy approach in December when its new inflation forecasts are due.

In further moves to tighten policy, the bank decided to phase out its foreign-exchange swap facility providing forint liquidity and said its weekly bond purchases would fall to 40 billion forints ($133 million) from 50 billion from next week.

“If warranted for the maintenance of market stability, the NBH will stand ready to temporarily raise the volume of weekly purchases at any given time,” it added.

Tuesday’s rate hike was smaller than the median forecast of analysts for a 25-bp rate increase in a Reuters poll.

The forint has weakened amid global market jitters from around 349 at the time of the August rate meeting – a depreciation that could add to inflation pressures.

Like much of the world, Central Europe is suffering inflation pressure due to supply shortages and higher energy costs, but its economies are also gaining speed and labour markets are tightening, putting upward pressure on wages.

The Hungarian bank also raised its overnight deposit rate by 15 basis points to 0.7% on Tuesday.