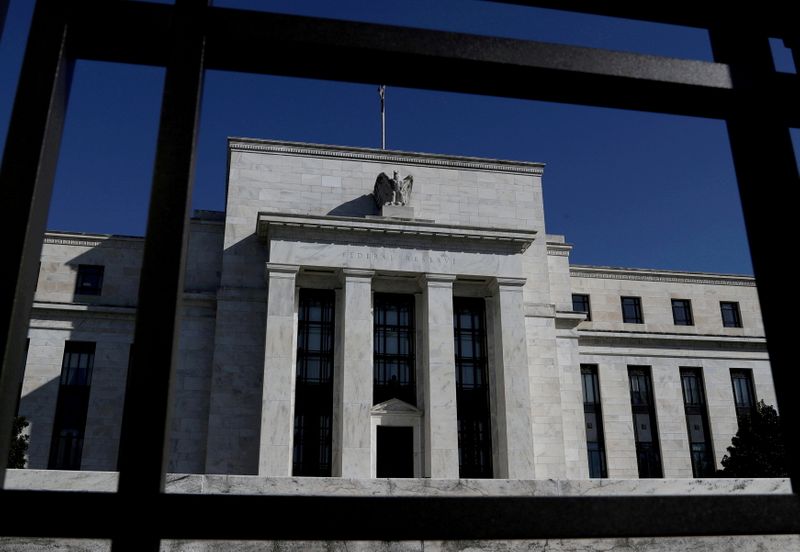 WASHINGTON (Reuters) – The Federal Reserve may be wrestling with an inflation problem, but two former senior staffers at the U.S. central bank argue that continued higher prices in the future may be what is needed to shift the whole economy to a higher plateau and deliver a jobs boom that helps the broadest set of people.

David Wilcox, a former Fed research director, and David Reifschneider, a special adviser to former Fed Chair Janet Yellen, argue in a new research paper that once the coronavirus pandemic passes and the Fed is able to raise interest rates to more normal levels, it should then increase the national inflation target from 2% to 3% and use a shock treatment of surprise rate cuts to hit it.

“The unemployment rate could average 0.75 percentage point or more below its sustainable level during the first 15 years after the higher target is announced,” representing about 1.2 million or more additional people employed each year, the two economists, now with the Peterson Institute for International Economics, estimated.

“To the extent that people drawn into the labor market when it is tightest come from marginalized groups,” they wrote, allowing higher inflation “could also help reduce racial and other inequities” by keeping people in jobs longer and allowing them to get more experience and training.

The risks – of financial bubbles due to loose credit or a possible recession triggered by rate hikes to combat a spike in inflation – are manageable, the two contend, and worth what they say would be “a marked boom in employment and output during the transition period.”

The core personal consumption expenditures (PCE) price index, a measure of inflation closely watched by the Fed, hit 3.5% on a yearly basis in June, which has touched off a debate at the central bank about whether interest rate increases may be needed sooner than expected to keep prices in check.

Wilcox and Reifschneider released their paper about a week ahead of the U.S. central bank’s main annual research conference in Jackson Hole, Wyoming, a gathering likely to include broad discussion about the pandemic, and the effectiveness of a new Fed monetary policy framework adopted just a year ago.

Debate over that new framework from the outset excluded consideration of a higher inflation target, a politically sensitive idea that might run afoul of the Fed’s mandated goal of “stable prices.”

While the 2% target has been broadly accepted as reasonable to keep the economy away from the opposite ill of falling wages and prices – deflation – the Fed’s inability to boost inflation to the 2% level over the last decade led the central bank to announce that it would temporarily allow higher inflation “for some time” in order to reach its goal on average.

Many top economists have argued the Fed should take the next step and lift the target permanently.

The 2% benchmark was set at a time when global interest rates were drifting lower for a variety of reasons, leaving the Fed’s benchmark overnight interest rate closer to the “zero lower bound.”

That left less room to cut interest rates to fight recessions and downturns, resulting in unconventional tools like bond purchases becoming a normal part of central banks’ toolkits. During the pandemic-fueled downturn, for example, the Fed not only cut its policy rate to near zero, but began buying $120 billion in long-term securities each month to hold down borrowing costs even further.

The standard argument in favor of a higher inflation target is to let the Fed’s policy rate move higher as well, and provide more flexibility to battle any economic slowdown through rate cuts alone.

Wilcox and Reifschneider lay out a different argument: that the very act of announcing the higher target, if coupled with actions like a rate cut to achieve it, would have lasting economic benefits.

They note that the Fed’s new framework promised a review after five years, a point at which, the two argue, “the current surge of inflation will have long since subsided, and the unemployment rate will already be a little below its sustainable level,” and able to be lowered further by another policy shift.

“Many researchers have noted that if central banks raised their inflation targets – either individually or in concert – they could do a better job in the long run of keeping inflation near its target and the workforce fully employed,” Wilcox and Reifschneider wrote.