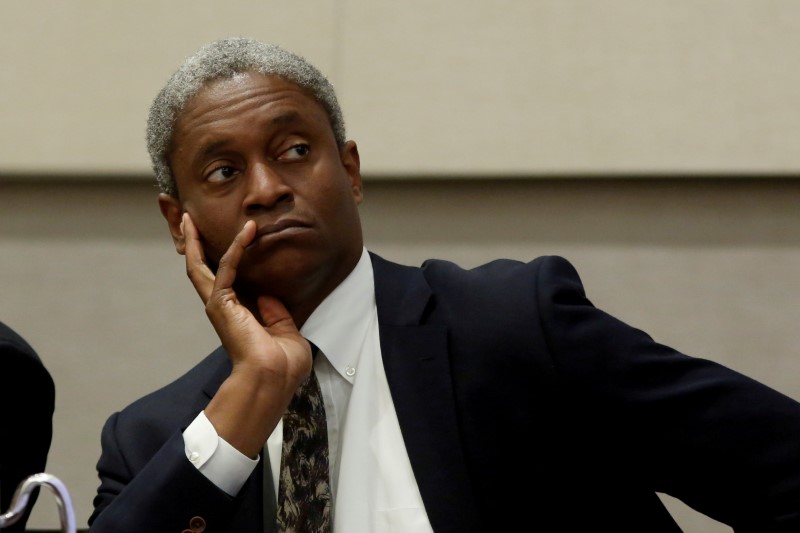 By Jonnelle Marte and Howard Schneider

(Reuters) – Two Federal Reserve officials said on Monday that the U.S. economy is growing rapidly and that while the labor market still has room for improvement, inflation is already at a level that could satisfy one leg of a key test for the beginning of interest rate hikes.

Atlanta Federal Reserve Bank President Raphael Bostic said he is eyeing the fourth quarter for the start of a bond-purchase taper but is open to an even earlier start if the job market keeps up its recent torrid pace of improvement. Moreover, he and Richmond Fed President Tom Barkin both said they believe inflation has already achieved the Fed’s 2% threshold, according to their separate assessments. That is one of two requirements to be met before rate hikes can be considered.

Their remarks are a sign that as Fed officials hold discussions about how and when to taper their asset purchases, they are also getting more detailed in their debate about what it will take to satisfy the Fed’s inflation target under the new framework.

Bostic, who has already penciled in late 2022 for the start of rate hikes, pointed to the five-year annual average for the core personal consumption expenditures index, or core PCE inflation, which by his calculation reached 2% in May.

“There are many reasons to think that we may be at that goal target right now,” Bostic told reporters. But he said the committee has yet to agree on the metrics it will use to measure that progress, something policymakers will need to discuss.

Barkin said high inflation seen this year may have satisfied one of the Fed’s benchmarks for raising rates, though there is still room for the job market to heal before rates should rise. Under the Fed’s current policy guidance, rates will rise “when inflation hits 2%, which I think you can argue it already has, and it looks like it is going to sustain there,” Barkin said at the Roanoke Regional Chamber of Commerce in Virginia.

Their remarks echoed comments made by St. Louis Fed President James Bullard last month, who said that the current pace of inflation, at 3.5% annually by the Fed’s preferred measure, is well above the central bank’s 2% target, and adequate in his view to make up for past weak inflation as required by the central bank’s new framework.

Under a new framework unveiled last year, Fed officials agreed to leave rates at near-zero levels until the labor market reaches maximum employment, and inflation averages 2%, on track to moderately exceed 2% for some time.

Policymakers said in December they would continue purchasing government bonds at the current pace of $120 billion a month until there is “substantial further progress” toward the central bank’s goals for inflation and maximum employment.

With the elevated inflation levels reached during the pandemic, Bostic said, the Fed has effectively achieved the “substantial further progress” goal for inflation.

More progress is still needed in the labor market, but that goal could be accomplished after another month or two of strong job improvement, Bostic said. That puts the Fed on a path to begin trimming purchases between October and December, or sooner, if the gains in August are stronger than expected, he said.

Boston Fed President Eric Rosengren said on Monday that the central bank could begin withdrawing support even sooner than that. He said during an interview https://apnews.com/article/business-health-coronavirus-pandemic-b7766deeda2afcbecf427ca7e2658adf with the Associated Press that the Fed should announce in September that it will begin reducing its purchases of Treasury and mortgage bonds “this fall.”

Barkin did not specify a timeline for when the Fed may start to reduce its asset purchases, but said he is watching the employment-to-population ratio to evaluate whether the labor market has made enough progress toward the Fed’s goals.

In terms of how to structure the taper, Bostic said he supports a “balanced” approach that reduces mortgage-backed securities and Treasury securities at the same rate. He also said he would be in favor of tapering asset purchases over a shorter period than what the Fed has previously done. “I am in favor of going relatively fast,” Bostic said.