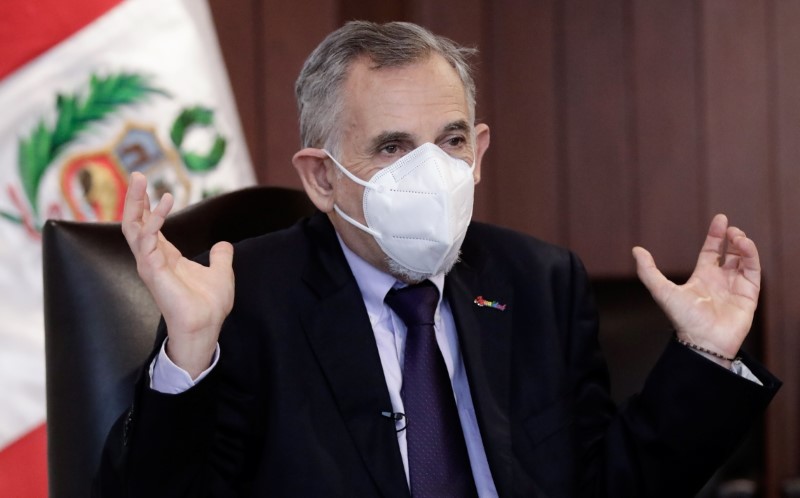 By Marco Aquino and Marcelo Rochabrun

Peru, the world’s No. 2 producer, is highly dependent on mining taxes and new President Pedro Castillo has promised to deliver more social programs to lift the country’s poor.

The election of Castillo, a member of a Marxist-Leninist party, as president in June has spooked investors, with Peru’s Sol currency falling to a fresh record low against the dollar on Monday.

Francke, a moderate left-wing economist who has worked for the World Bank, told Reuters in an interview that the government is working to regain investor confidence.

He said the administration is committed to maintaining fiscal discipline and will reduce the deficit in 2022 by 1 percentage point compared with 2021. Spending ceiling rules will also be reinstated after they were lifted due to the pandemic.

“We will keep to a declining path for the fiscal deficit over time that will keep a debt ceiling at a pretty reasonable level,” Francke said.

Francke’s fiscally conservative messaging contrasts with that of the cabinet’s chief, Guido Bellido, a self-described socialist who recently told Reuters the new administration hopes to create new public companies https://www.reuters.com/world/americas/exclusive-perus-new-govt-eyes-natural-gas-hydroelectric-sectors-public-companies-2021-08-08 to enter the and hydroelectric sectors.

Francke said he had had no discussions about new public companies or about financing new investments from state-owned entities already in existence.

Francke said the new administration is taking over a solid balance sheet, with preliminary estimates showing tax revenue rising 24% in 2021 compared with a year earlier, driven by high metal prices and a reopening of the economy.

In 2022 those revenues would grow by an additional 8% without the need of any reforms, he said.

The country’s GDP should grow 10% this year, he said, confirming prior estimates, and would grow an additional 4.8% in 2022.

The government is in the process of drawing up its budget for 2022. Francke declined to provide details but acknowledged spending would increase.

Rating agencies have revised Peru’s outlook to negative in recent months, on the double wammy of political turmoil and the perception that Castillo had no clear roadmap for the economy.

Francke said they will hold meetings with the agencies in the next two weeks in hopes that Peru’s investment grade rating is not affected.

The rating has short-term importance to Peru as it will still run a deficit under Castillo, he said, so it is likely the country will look to issue new bonds.

The key to increasing public spending under Castillo’s administration is increasing mining taxes, Francke said, although the handful of miners who have signed tax stability agreements would be spared from reform.

“It’s hard to propose a renegotiation, what we can do there depends on incentives,” Francke said. “Currently there are fewer companies with tax stability deals…which gives the state more room to maneuver.”

While Peru signed as many as 25 tax stability deals in the 1990s, only six remain in place.

Peruvian miners have said they are open to discussing https://www.reuters.com/article/peru-mining-idCNL1N2PC30S tax modifications but that it could come at the expense of the sector’s competitiveness. Francke said competitiveness would not be affected by taxation if copper prices remain high and that any reform would be mindful of fluctuating prices.

He declined to provide specifics on the tax reform but said he hopes to come up with a ´proposal this year, which needs to be approved by Congress.

“As time passes, you are losing (tax) revenue,” he said.

Francke also said Peru should prioritize new mining projects that have not caused social unrest, citing Souther Copper Corp’s Tia Maria copper project as an example of a project that would not be prioritized.